So, quesadillas are one of my favorite foods. I love them so much, and it’s absolutely because I love cheese (pizza is another favorite of mine). Unfortunately, cheese is high in saturated fat and sodium, so I constructed one loaded with veggies and with less cheese than those you would find at a restaurant.

First, I thinly sliced zucchini and bell pepper, then heated it through on a dry pan. Meanwhile, I shredded some Tillamook cheddar cheese and spread it evenly on a whole wheat tortilla. I added the warm veggies to one-half of the tortilla and topped it with arugula. Next, the tortilla was placed on a pan over medium-high heat and heated until the cheese was melted and the bottom was golden-brown. I folded it in half, cut it and enjoyed with some chunky salsa! 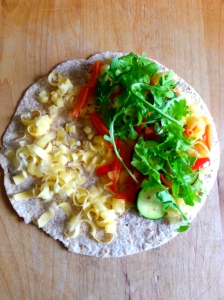